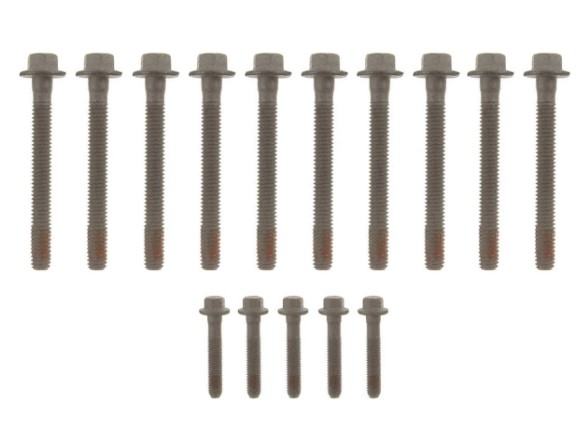 LS engines with stripped threads can be repaired with Time Sert kits for the best possible repair. Many will say that you can just use a Heli Coil, I would caution against that. See the video below for more information on some differences between Time Sert and Helicoil.

We have head bolt thread repair kits made for fixing the threads without the need to remove the block or modify tooling. One of the most common calls we get for head bolt thread repair is for the M11x2.0 head bolt size used on many LS engines from around 2004 to 2009. We prefer the Time Sert 3700 for first time repairs for Avalanche, Colorado, Express, Corvette, Suburban, Silverado, Tahoe, Trailblazer. For those models from around 2004 to around 2009, engines include many of the 4.8, 5.3 and 6.0's. If doing a second time repair after a temporary type Helicoil kit has failed making the hole bigger use the 3700BS. Time Sert engineers and GM engineers have worked together to design thread repair kits that keep the functionality of the TTY head bolts in tact. Beware of using any kit that changes the location of the threads which causes unintentional consequences. See our article on TTY bolts for more information on this.

Tips when working with TTY bolts.

1. Clean out bolt holes/threads to help obtain the correct initial torque. Any rust or rough threads may affect initial torque, that can affect the tightness of the bolts in the final step.

2. Unless specified by service manual – DO NOT use lubricant anti seize or sealer (Many new TTY bolts come with sealer already applied)  – anti-seize or oil may cause an incorrect initial torque also. Note that if the bolt enters a water jacket, sealer may be required (refer to a service manual).

3. Reusing Torque to Yield bolts can result in failure. Replace TTY head bolts to help insure the quality of the repair. Like with any rule, exceptions may apply – check the service manual. Avoid using thread repairs that install an insert at the surface (when the original threads start down in the hole) which changes the location of the original threads. TTY bolts are designed to expand at different temperatures to maintain the correct clamping force on the head, during it's expansion and contraction from temp variations; changing the design may cause premature failure. Time Sert maintains the original thread location as opposed to NS300 and some others that use a one size fit's all method, disregarding the original design and function intended by the engineers.

4. When removing TTY bolts it may be helpful to first use a hammer and punch to tap on the top of the bolt sharply. Many technicians have used variations this tip for years when dealing with seized or overly tightened bolts. GM actually recommends this in a TSB (Technical Service Bulletin) specifically to help prevent breakage when removing TTY bolts. GM also says that hand tools seem to be the best method to help prevent breakage (although this could be debated).

It's best to make sure of the head bolt size prior to ordering a kit or doing a repair. When in doubt on what size a vehicle uses, I look up the head bolts on O'Reilly Auto Parts website, because (at the time I'm writing this) they are the only ones that include the size of the bolts. Now on these engines there's also an M8x1.25 size head bolt size. These fail less often than the larger M11x2.0 head bolts; there is a repair kit for those also, it's the 1812CORE-PLATE. This kit can also be used used for main bearing thread repair.

Many Corvettes, Tahoe's, Silverado's, Yukon's and Suburban's use this larger size head bolt.

The bolts above are M8x1.25 for rocker arms, the bolts are sold at parts stores, the thread repair kit we sell is the 1812CORE and 1812COREBS.