Free Shipping Within USA Starting at $199 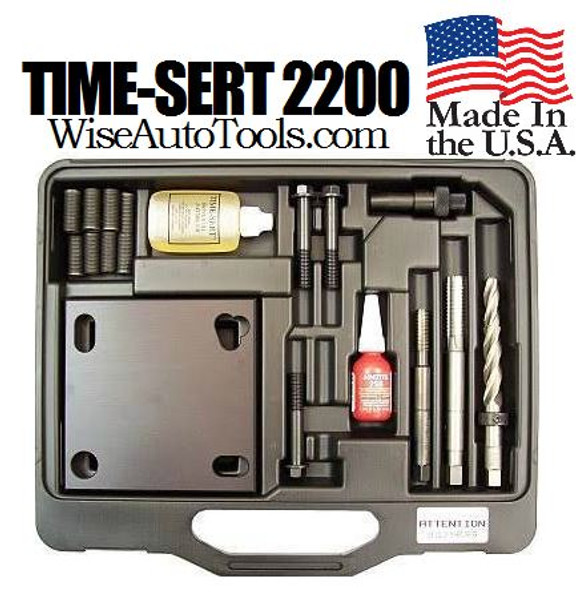 Free Shipping. The TIME-SERT 2200 head bolt thread repair kit is a universal head bolt thread kit that can be used on a variety of automobile engines that use the very common metric size 11 millimeter by 1.5 millimeter bolt size. This is for a "first time" repair which means it has never had a repair insert of any kind installed previously. For second time repairs use a Big Sert kit which has the letters BS following the numeric kit number. We have a partial application list below. The 2200 is considered a "universal" kit because the tooling has an adjustable stop that can be adjusted to work on holes of different depths. Although, it works on other engines, the 2200 kit is mostly used for Toyota engines. There's is even a TSB out saying that this kit is what's recommended to repair the three or four middle bolts on the backside of the head of many Toyota engines. We recommend installing all ten inserts on Toyota's while the head is off to eliminate any pulled threads when installing the head bolts and torqueing to the manufacturers' specifications (torque specs). That also also eliminates weak links that the remaining aluminum threads would end up being, that could possibly fail shortly after the car is back on the road. Therefore it's recommended to upgrade to the much stronger tensile strength steel, bushing type inserts (part number 11155) that are included in the Time-Sert 2200 head bolt thread repair kit. TIME-SERT is recommended by leading automobile manufacturers. See our pictures for measurements of tooling in SAE (inches) and in metric (millimeters). Questions and Answers on the Time Sert 2200.

If ordered here on wiseautotools.com we'll ship to Canada however import fees are not covered.

*Note TTY head bolts should be replaced as per service manual. Reusing stretched head bolts can cause repeat thread and/or head gasket failure.

Kia Partial List - 3.3 Liter and possibly other size engines as well, as long as has M11x1.5 head bolts.

Cadillac and Oldsmobile Northstar Engines *Note the Time-Sert 2200 universal will work on the Northstar engines by adjusting the stops for the different depths. There are also specific kits listed below that have measurements pre-determined. A total of 20 inserts are needed for the Northstar engines if repairing entire block.

See the following video for our explanation of: What makes Time Sert "better" than Heli Coil?

Question - On the holes that have line-up dowels. Do you have to replace the dowels? Will the hole be too large after reaming?

Answer - No. The tooling will not disturb the original dowel hole. Dowels have to be removed before you can drill the hole that has a dowel in it. The dowel will go back in as long as it was not damaged when it was removed. See our dowel removal tool CV95400. Workaround without the special tool below. Caution: Do not mar the surface of the block! 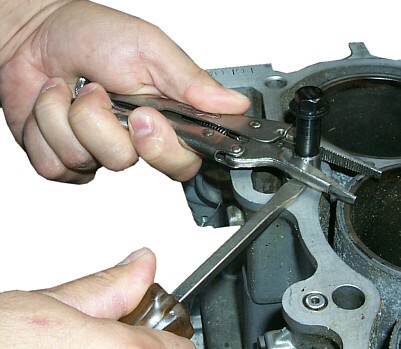 Place a suitable bolt that will fit closely into Dowel so that it will not crush. Use a pair of vise grips to hold on the "outside" of the dowel. Slowly work the dowel back and forth as you use slight pressure under the vise grip with a screw driver to give up lift. Use care not to scratch the top of block in the process. Sometimes head alignment dowels will come out easy and sometimes hard depending on tolerances of the block, how much the dowel gets crushed in the process, or rust, etc.

Question - I only need to repair one hole's threads. Do you sell just the tap?

Answer - No, we only sell individual Time Sert tools if our customer has a kit and needs a replacement piece for an existing kit. There is a reason for every tool in the kit (see the video). Just the tap is not enough to install an insert. Notice the reamer is NOT a regular drill bit. If a someone needs a replacement core drill or tap call to order at 800-734-8665.

MSRP:
Now: $528.69
Was:
Includes Free Shipping and no sales tax charged outside Florida. The TIME-SERT 2200 head bolt thread repair kit is a universal head bolt thread kit that can be used on a variety of automobile...

MSRP:
Now: $510.63
Was:
Call for application assistance. Free shipping and Free tips. During checkout just write "Tips" and we will email free tips on doing the job that we've compiled over the years. The TIME-SERT 5553...